Restaurants and bars across Hong Kong are limiting their services amidst the current pandemic, to follow the government’s announcement on social distance measures. Many eateries have thus taken on serving hungry customers at home, by instead focusing on takeaway and delivery options. That’s not to say that fine diners can’t indulge too – luxury hotels and Michelin-starred restaurants are now on-board the new norm: something that would have been unimaginable only a few months back. We’re not complaining, however, and would be more than happy to cater to have a home-based meal with some of the most exclusive takeaways and deliveries from around the city. These are the Michelin-starred restaurants designing menus for the gourmet diners, and to match the gourmet atmosphere. 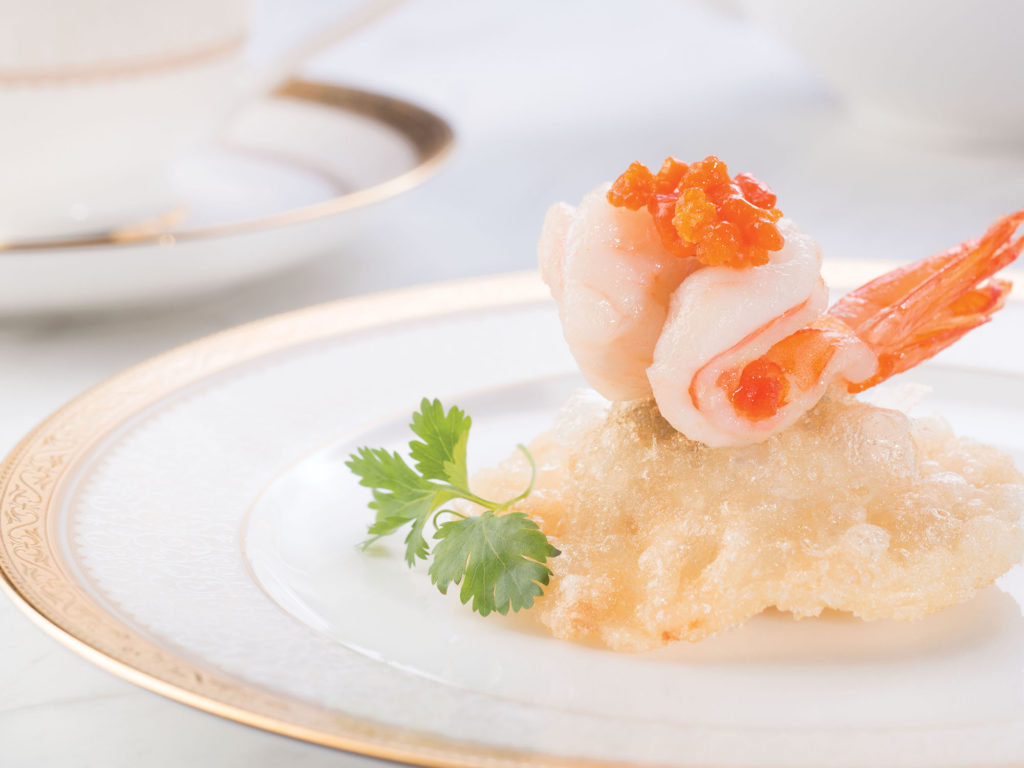 Awarded its coveted third Hong Kong and Macau Michelin Star (making it a 3-Michelin star restaurant) in 2016, T’ang Court (at the Langham Hotel, Hong Kong) has maintained its consistency and high-flying status ever since its debut. The restaurant has earned prestigious titles from Forbes Travel Guide, Elite Traveler, and Hong Kong Tourism Board. The restaurant is under the realm of Kwong Wai Keung, the Chinese Master Chef (since the eatery’s opening in 1988), and was later joined by Wong Chi Fai in 2000. Deemed as the third Chinese restaurant in the world to obtain the honor, the expansive menu is based on the Tang Dynasty era (hence the name) and will serve diners an assortment of some of the best Cantonese delights and traditional dishes in the comfort of your home. Every meal is available for takeaway via email or phone call.

Specialties at the Michelin-starred Spring Moon at the Peninsula include seafood, dim sum and a secret XO-sauce recipe in its dishes. The luxury restaurant is now serving its award-winning gastronomical delights for takeaway, for a little at-home indulgence. Using biodegradable packaging (hats off to the environmental initiative!) the eatery also asks that guests bring their own bags to carry the meal back. Order this any day between 11:00am to 2:30pm and 5:00pm to 9:00pm and pick it up at the hotel concierge (call or email to order).

With the newly launched service JIA Everywhere, JIA Group now offers delivery on its restaurants, which includes popularDuddell’s. The Chinese restaurant is famed for its fine art-meets-fine dining connotations, hosting exhibitions and events throughout the year. However, with events postponed or canceled due to the current climate, the Michelin-starred Duddell’s has improvised by focusing on its food – and bringing it to you with a la carte options or exclusive family-sized sets. The restaurant also provides Bespoke Catering services entirely tailored to your preferences and tastes. Otherwise, there’s also the succulent Peking Duck, dim sum and crispy salted chicken – some of our personal favorites.

It’s difficult to give up the sweeping views which come with the Ritz Carlton’s Tosca di Angelo – situated on the 102nd floor of the luxury hotel. The fine-dining restaurant is still open from Wednesday to Sunday, headed by Director Angelo Aglianó, a masterful chef behind the Mediterannean-meets-traditional Italian cuisine. Granted with a Michelin star, diners can now indulge in some of the finest takeaway dishes, including Mezzi Paccheri pasta with Sicilian red shrimps and basil pesto sauce, red star grouper in Matalotta fish soup with olives, capers and cherry tomatoes, and traditional tiramisù, for a taste of Sicilian fare. Call or email to order your takeaway.

Holding two Michelin stars to its name, Tin Lung Heen is situated on the 102nd floor of the notable Ritz Carlton (also the highest-located Chinese restaurant in Hong Kong). Under the reigns of Chef de Cuisine Paul Lau, the palace-inspired eatery boasts incredible dim sum options, in-house and at home. Some highlights available for takeaway include the baked barbecued pork bun with almond flake, the braised pork belly with supreme sauce and the fried rice. Call or email to make your order.

NOTE: Items are available for pick up at the 9/F Arrival Lobby during lunch and dinner periods.

Part of the JIA group, and its delivery service JIA Everywhere, Louise specializes in heartwarming French cuisine, under the realm of Chef Royer. The restaurant (which earned its first MICHELIN star after only one year of opening) is beloved for its home-cooked concepts, which can now be delivered from the Louise kitchen to your home. Standouts to order include braised beef cheek, the Langoustine ravioli, and the lamb navarin. Order via the JIA delivery service or by WhatsApp.

With its Michelin star recognition since 2009, Ming Court (at the Cordis in Mong Kok) sustains its elevated Cantonese cuisine with dishes from dim sum to delectable classics like supreme pork loin and black cod. The restaurant is offering tasting menus and its regular menu for self-pickup takeaway to eat at your own leisure at home. Order by calling the restaurant or through OpenRice.

Awarded with one Michelin star (the first Punjab restaurant in the world with the honor), New Punjab Club is a tandoori grill house headed by Palash Mitra. The dynamic cuisine here is inspired by the post-colonial liberated era. Recommendations include the samosa chaat and tandoori lobster. Email the restaurant with your order before 2pm for pick up or delivery that evening.