Salt of the earth: Hong Kong’s avid diners were dealt a blow last year when the beloved Cafe Gray Deluxe at the Upper House closed its doors on December 31. But, the opening of Salisterra, the new concept that takes over the expansive space on the hotel’s 49th floor, will soon revive their spirits.

Look & Feel: As with the rest of the hotel, interior designer André Fu was given the responsibility for making over the restaurant space for Salisterra, and the result is a delight. Where Cafe Gray Deluxe veered towards staid elegance and shades of black, white, and gray, Salisterra has been given a bright, modern makeover. As always, the view is the star of the show, and the postcard windows remain throughtout. But, in a nod to 21st century aesthetics, modern colors and textures prevail–think chic banquette seating and pops of terracotta, burgundy, and turquoise. The ever-popular bar area has been upgraded, too—guests now walk through double doors into the “green room” which is done up in 50 shades of green and offers more space, and privacy than before. Guests are encouraged to interact—with staff and each other—at Salisterra, and the setup is designed for this. 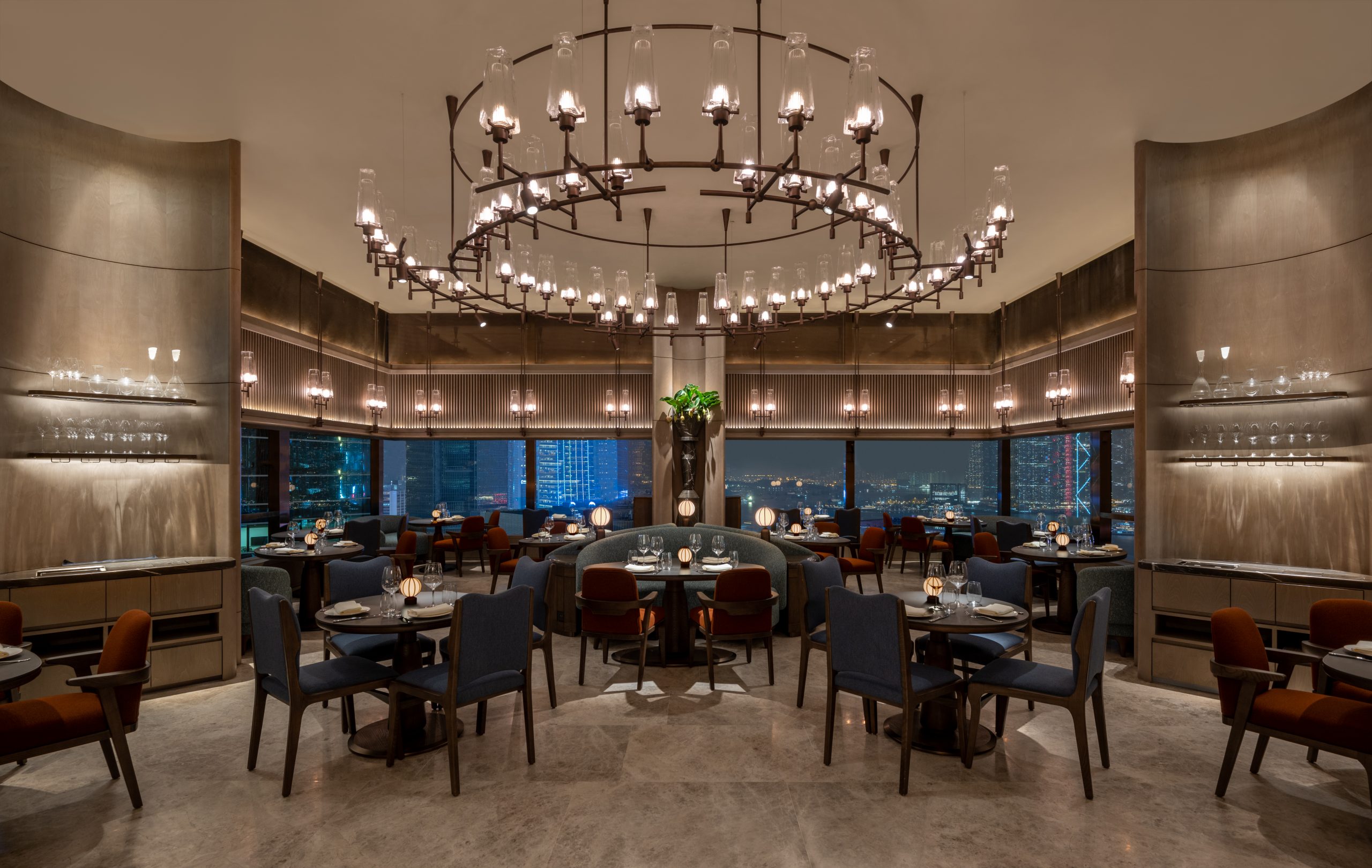 On the Menu: At any time, it’s a gamble to put your name to a hotly-anticipated opening like Salisterra. In the midst of a pandemic, when you can’t get to the restaurant, it’s ludicrous. But, for Jun Tanaka—of London’s famed Ninth restaurant—the risk has paid off. From London, he worked closely with the team on every aspect of the restaurant, leading training by videoconference, and regularly joining on-site chef Krzysztof Czerwinski during and after service on the phone or by Google Glass.

We pop in for lunch on the last day of the restaurant’s soft opening period, and although there are still a few small teething issues, it’s clear that Salisterra is going to be even better than Cafe Gray Deluxe. We’re handed a temporary menu—the real ones have yet to arrive—and we’re pleasantly surprised by what we find. Look, we were long-time fans of Cafe Gray Deluxe—it was a Hong Kong icon. But after so many years, it’s fair to say that the food has become safe. It was solid European cuisine, but it had somewhat lost its flair and innovation. Salisterra brings all that back in delightful fashion. Each dishes features surprising, elevating touches, and everything is designed to be shared family-style, a nod to the slightly more casual approach suggested by the name Salisterra, which is latin for “salt” and “earth.”

Chef Tanaka is fanatic about spreading the gospel of vegetables, and from what we try, it’s clear that the meat-free dishes here can stand on their own. The Sweet Potato Mash features a surprising kimchi cream topping, and I could easily have that as a meal on its own; the same sentiment applies to the perfectly fresh and summery Panzanella. The Pickled Carrots with Coconut Yoghurt and Grilled Hispi Cabbage with Tahini are also great—though they’re probably best accompanied by something heftier.

Seguing into more filling dishes, the gastronomic feast continues with the rich Duck Agnolotti; hearty, flavorful Ossobuco Tortellini; and pillowy—and surprisingly light—Gnocchi. As it that weren’t enough, we move onto mains. The herb-crusted lamb is a revelation—especially for someone that doesn’t particularly love lamb—though the salt-crusted toothfish is probably the only dish that we would pass on for future visits. Can’t win ’em all, I guess.

Do save room for dessert—the Lemon & Yuzu Tart is highly recommended—and be sure to pair your meal with a selection from the revamped wine and cocktail list.

As mentioned, during the soft opening, there were a few small teething issues—the egg yolk was left off our Duck Agnolotti and had to go back to the kitchen—and our cocktails took awhile to arrive. But, I’ve no doubt that service will be tightened as the team gets back in the groove—all the staff are holdovers from Cafe Grey Deluxe, so you’ll forgive them for a few slips after several months off service.

Jeng: The views, the food, and ambiance. Closing an icon like Cafe Grey Deluxe was a risk for Upper House, but Salisterra is a solid win.

Not So Jeng: We’ve heard a few grumbles about the messiness of the family-style service not being appropriate for a fine-dining restaurant, but we actually loved this as it made the restaurant feel a little more accessible. Reservations are hard to come by, though, as everyone wants a table right now.

FYI: There are different menus for breakfast, lunch, dinner, and afternoon tea, so you’ll have plenty of reasons to come back. There’s also a private chef’s table that’s perfect for special occasions.