It Takes Two: The latest in a slew of new F&B openings at K11 Musea, COBO HOUSE is a stylish new concept in Tsim Sha Tsui boasting delicious dishes – and even better views – created by not one but two rule-breaking chefs.

Look & Feel: You may have already heard of COBO HOUSE in its former incarnation in Sai Ying Pun. Those who have visited, though, will probably not recognize this transplant to Tsim Sha Tsui, which is essentially a brand new concept.

Thanks to the myriad paintings and objets d’art scattered around the place, stepping into COBO HOUSE feels a little light walking into the elegant home of an eccentric collector. All the piece create interesting focal points that are a solid counterpoint for the otherwise, simple, minimalist décor of the rest of the space. The real draw, though, are the floor-to-ceiling windows that flood the space with natural light and offer spectacular views over Victoria Harbour. 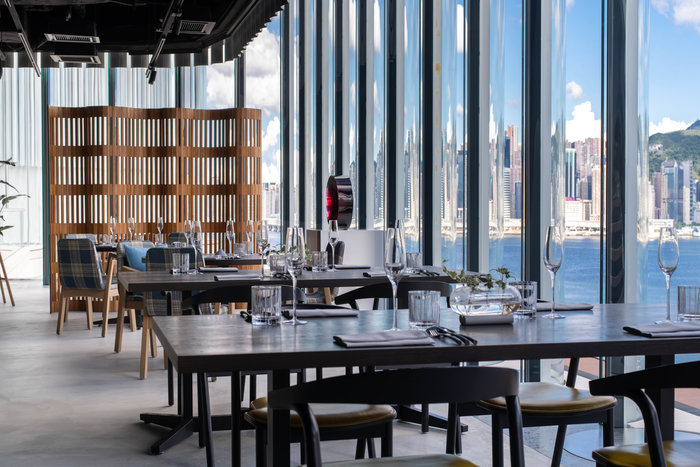 On the Menu: Trying to pigeon-hole the food here is a nearly impossible task. COBO HOUSE markets itself as a purveyor of “innovative cuisine,” and once you have a taste, you’ll understand why. The menus and dishes definitely don’t adhere to any specific cuisine or culinary style; instead, they’re a quirky blend East and West presented in a thoroughly modern way. Just don’t make the mistake of calling this fusion cuisine. There are several tasting menus available – four courses for lunch, and six or eight courses for dinner – and each one is (very sustainably) presented as a QR code that you need to scan with your phone to access.

Menus here are supposed to be a surprise – they’re called “unspoken” for a reason – and not really being able to understand each dish until it’s put in front of you is half the fun, so I won’t spoil it for you. I can, however, drop a few hints: summery fresh gazpacho spiked with raw fish; foie gras infused with Asian flavors, an oyster dish that bursts with the brine of the sea; and a rather brilliantly conceived beef dish. There’s a pretty solid wine list, too – RSRV Champagne is available – but the Rioja that was suggested as a pairing for the beef was a little too light to stand up against dish’s meaty flavor.

Meet the Chef: There are actually two chefs at the helm of COBO HOUSE. Ray Choi and Devon Hou are both Hong Kong chefs with plenty of Michelin-starred experience under their belts, gained at iconic restaurants like Mandarin Bar + Grill, L’Atelier de Joël Robuchon, Amber, and Arbor. The duo operates as a culinary “ying and yang,” bringing different styles that complement each other to create a creative new concept.

FYI: For the best seat in the house, ask for the semi-private dining area in the corner of the restaurant that boasts unparalleled views.