“Greater exclusion has become the norm” Daisy Catherine L. Mandap first came to Hong Kong from the Philippines in 1987 to take a job at The Standard (then Hong Kong Standard). Soon, she realized that there were no media platforms catering specifically to Filipinos living in Hong Kong, and a new goal was born. After discussions with a potential investor who ended up backing out of funding the project, she and her husband, Leo A. Deocadiz, saved up for eight years to cover printing costs themselves.

Finally, newspaper The SUN launched in 1995, with local Filipinos — mostly degree-holding domestic helpers who attended the publications’ writing workshops — contributing stories, and Mandap and Deocadiz at the helm as editor and publisher. Over two decades later, the organization has launched radio stations, a Facebook Page, and has served as a springboard for plenty of Filipinos interested in kick-starting careers in writing. Mandap tells The Loop HK all about the stories The SUN has covered over the years, as well as the changing attitudes towards domestic helpers in Hong Kong.

Covering the past five presidential elections were big events for us, especially when absentee voting for the presidential and senatorial elections was first introduced in 2003. We also got to cover several presidential visits, which, given the small size of our community, allowed us to get up close with our leaders. Upheavals in Hong Kong often impact our community. The SARS epidemic in 2003, for example, gave reason for employers to stop their helpers from going out on their rest days. Filipino musicians suffered heavily because hotels and restaurants were shut down when tourists stopped coming to Hong Kong. The botched Luneta hostage taking in 2010 put a severe strain on relations between Hong Kong and the Philippines, and left many of our OFWs (overseas Filipino workers) vulnerable to bullying and threats from angry locals. We were in the midst of all these, reporting how they were affecting our fellow Filipinos.

For a journalist, exceptional writing is nearly as important as having the nose for news. More impressive are the ones who have both abilities, plus integrity to boot. [One such person we’ve worked with] who comes to mind is our good friend Sheila Coronel, now dean of the graduate school of journalism at Columbia University in New York. We have known Sheila for about four decades, from the time we were both students at the University of the Philippines taking part in anti-Marcos rallies, to when she became a topnotch writer working as a correspondent for the New York Times and later co-founding the Philippine Center for Investigative Journalism. Sheila not only writes very well, she also spearheaded the writing of in-depth and comprehensive articles that exposed many irregularities in the Philippine government, and for this, was honored with a Ramon Magsaysay Award, also known as the Asian Nobel Prize. We have so many other colleagues who also practice ethical journalism — the years we spent in this profession have been all worth it [because of them]. 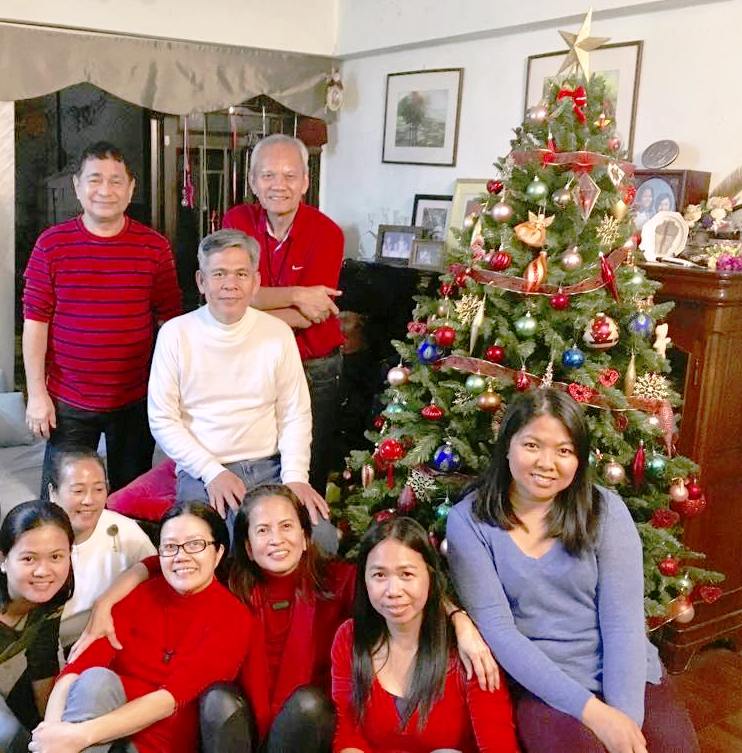 The Sun staff writers and contributors at the newspaper’s 2017 Christmas party.

If the plight of our domestic workers is any indication, I’d say greater exclusion has become the norm. Their rights have been considerably whittled over the years. Now they cannot just quit their job and move to another employer because immigration says they have to go back home first and wait for their new work visa there. Neither can they live outside their employer’s home anymore, even if the employers themselves prefer this kind of arrangement. More recently, Hong Kong’s courts have categorically said foreign domestic workers will never become permanent residents, and neither will their children be entitled to this status, unlike before the handover when many FDW (foreign domestic worker) children born in Hong Kong were accorded this status.

Kids of Filipino residents were also dealt a blow after 1997 when they were put in the same Chinese language education stream as the locals because of the localization policy. Because of this, many of our kids could not get into a university in Hong Kong, so they had to go the Philippines to study. On coming back, many realized their Philippine degrees were not accorded the same status as a locally acquired one, and could not get jobs in line with what they studied. Many ended up working in Lan Kwai Fong. The good news is that a few years ago, after intense lobbying by groups that champion ethnic minority rights, the two-language stream was reintroduced in the local school system, so we’re seeing an increasing number of Filipino kids being admitted to Hong Kong universities.