A Hong Kong City Guide You Didn’t Know You Needed Vibrant and energetic, Hong Kong has long been known as a city that never sleeps — that is, before Covid. Fortunately enough, the pandemic has given Hong Kong people a chance to slow down and rediscover the beauty of their hometown. And this might be the reason behind the flooding emergence of passion project accounts on social media, each an archive of our unique urban aesthetics that showcases the city’s mix of Western and Eastern cultures. This city guide, also a passion piece of my own, highlights 6 Instagram accounts that capture the bits of Hong Kong before they vanish.

Thanks to the dazzling neon lights that occupied streets of Hong Kong ever since the ’50s, our cityscape has become one of the greatest influences on the cinematographic representation of cyberpunk in both Hollywood productions and Japanese animes — see Blade Runner (1982) and Ghost in the Shell (1995). @citycharaters, managed by French photographer Romain Jacquet-Lagrèze, documents the visually striking traditional Chinese characters on streets, be they embedded on walls or gleaming in neon light, composed in all the different styles of calligraphy you can think of. And it doesn’t stop there. Clicking out of the posts into its profile, all characters are meticulously organized in a way that creates short poems that respond to our times. 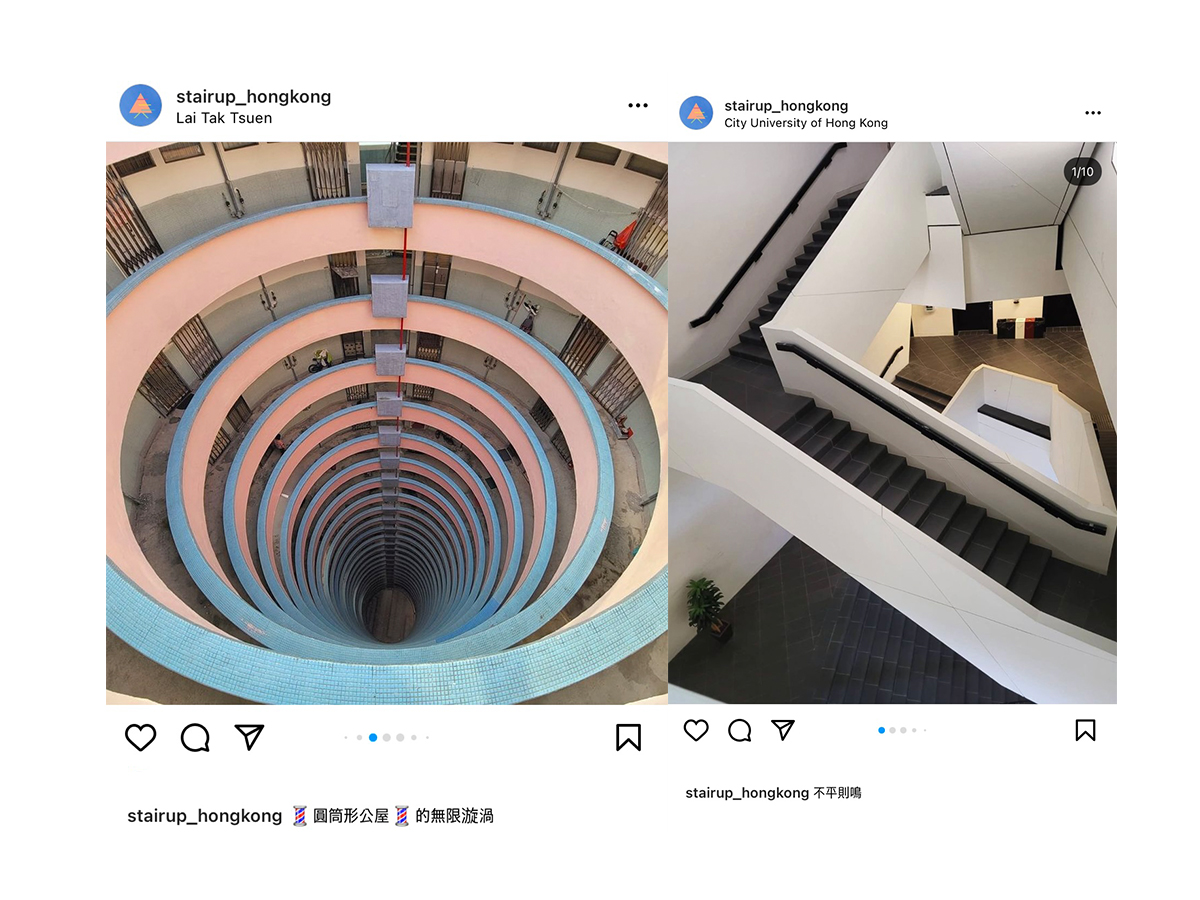 And the many different types of stairs in this vertical city also contribute to the unique streetscape that we take for granted. In @stairup_hongkong, not only can you see various straight, dog-legged, scissors, bifurcated, spiral and curved staircases, you can also learn more about the history told by architecture inspired by both Chinese and European styles from all around Hong Kong.

If there is one thing we cannot miss while introducing the sub-architecture of Hong Kong, it would be the iron gates. Active since February 2021, @magatezine regularly shares with its followers the iron gates, both vintage and modern, that guard generations of the city’s people. So, what’s the significance? According to Chinese Fengshui, the design of iron gate, usually sitting in front of the entrance of a house or building, directly affects the owner’s fortune. For instance, gates adorned with triangular, squared, circular, wavy and rectangular motifs symbolize the fire, earth, metal, water and wood from the five elements of Fengshui respectively.

And if you want to know more in-depth about the evolution of Hong Kong architecture, you certainly want to see posts from @hkarchitecturalhistory in your feed. Managed by the architect-historian Charles Lai, the Instagram account fills in the gap of knowledge with history born by architecture and its architects’ stories and styles, all supported by research and professional insights. Paying attention also to the tracery, junctions of pillars and other components that made a great building, the account sheds light on the details and gives its readers a well-rounded understanding of Hong Kong architecture.

While architects and designers shape Hong Kong with old and new builds, some people take their creativity to the outdoors, and the streets are the canvases. Starting in 2019, in order to record the constant changes of our streets, @hkurbanrecord, as suggested by its handle, records what people have to express on the public walls. Be it graffiti signed by artists known or unknown, or what seems to be spontaneous scribbles left there after a couple of drinks, the owner of @hkurbanrecord can always seem to spot the cute side even in the part of the city that we tend to overlook.

And if you happen to be a fan of Hong Kong-styled calligraphy or graffiti, @the.plumber.king is a name that you won’t be unfamiliar with. Chiu-tong Yim, also known as “The Plumber King”, started to write down the phone number for his plumbing business wherever he saw could find room in the city’s streets and alleyways. It started with just white paint, then pink, then pink with white outlines. It is ironically Yim’s lack of formal study in calligraphy that contributes to his uniquely innovative style of writing. Defying the traditional way of lettering, the calligraphy of the plumber king is most noticeable by the upward ticks that finish most of the strokes in his Chinese characters.